Creator, tester, and deployer of widgets

One week with ErgoDox 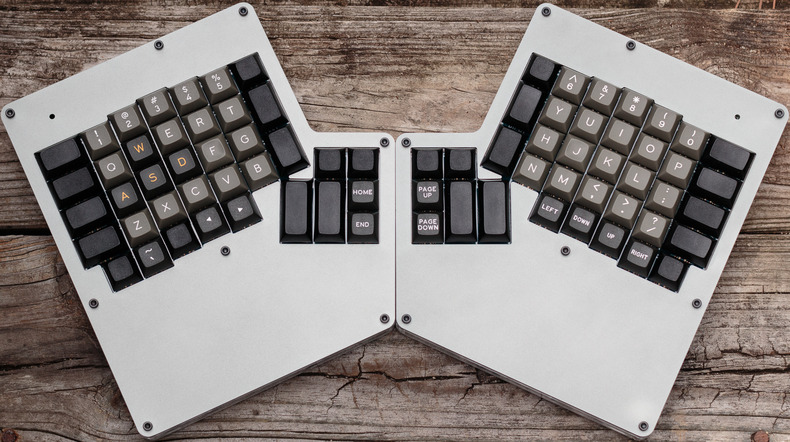 This summarizes my notes on a week's ErgoDox use. Notes on the build process

The Dox is a flat keyboard with variable spacing, thumb clusters, and custom firmware. It's a lot to get used to.

The flatness presents a few ergonomic challenges, most of which I solve with rotation into a neutral position. I still feel like I could use something like the Kinesis Ascent.

I've been using DSA keys on my Poker II for two months to get myself used to the profile. I love DSA profile both for the lack of profile and the way they scoop your fingers. That the majority of my DSA keys are in thick PBT is icing.

The bolts aren't flush, so the board slides around on them a bit. I am looking to rubber mats as a solution to this issue.

Transportation is easy. The boards with one side flipped fit snug opposite my laptop in my laptop case.

I missed one switch and one diode while soldering. On the default layout, they are ~L1 and `/~ keys. Diagnosis and repair was easy due to the clear bottom and the hand-tight case bolts.

I made a few mistakes early on, such as left-arrow for space. Rather than admonish myself for the mistake, I realize that it presents its own solution. The position of left arrow on the right hand is convenient and I might make use of it in future layouts.

I keep toggling layer 1 and 2 due to the location of their toggles. It is annoying, as layers stack in this firmware. To get back to normal typing, one has to 'pop' the layers back off of the stack in reverse order, or else define a 'clear layers' key.

I've moved the mods from the base Qwerty layout, especially modifier keys. Switching between Mac and Windows results in weird key placement. Win/Alt and Alt/Cmd don't have the same functionality, and I swap them in OS X.

I've got a set of changes planned in the ErgoDox configurator. This should simplify movement and modifier keys.